What Does a Yellow Feather Mean?

We’ve talked about the different meanings of feathers. We’ve also discussed feather tattoos generally mean (though, again, some people may have their own unique take on it). But now, we’re taking on the different meanings of feathers based on color. For this article, we’re going to explain the symbolism behind yellow feathers and what they really mean.

The Meaning Behind the Color Yellow

Yellow is a bright color, thus it is a symbol of joy and hope. In a natural setting, it’s usually associated with the sun and flowers. It symbolizes brightness, hope, happiness, optimism, joy, clarity, positivity, honor, and loyalty. Like the sun, yellow brings about feelings of warmth, happiness, youth, and cheerfulness.

In most cultures, yellow represents a joyous event, but this is not always the case. In Thailand, yellow symbolizes luck and traditionally worn on Mondays to celebrate the day King Bhumibol was born. In France and Germany, yellow is the color of jealousy and betrayal, and French traitors and criminals’ doors were painted yellow. In China, yellow is often associated with the pornography industry. In many African countries like Egypt, yellow is associated with influential people because of its closeness to the color gold, but in Egypt, it’s also used for the color of mourning. In Japan, it was a symbol of courage and loyalty to the royal family.

Legend also has it that, around the 16th century, yellow was the color of mourning in Spain. When Catherine of Aragon died, her husband King Henry VIII and his mistress Anne Boleyn were supposedly seen wearing bright yellow clothes. It appeared like they were honoring Spanish culture by wearing their color of mourning, but everyone in court knew that they wore yellow in joy now that Catherine’s death meant Henry could marry Anne.

The color yellow also has various meanings today. Yellow ribbons are usually worn by people welcoming home loved ones, especially those who left to join the military. It’s also the color used to suggest calmness, thus the term “mellow yellow.” However, the color also has negative connotations. A “yellow” or “yellow-bellied” person is someone who is very cowardly. And the term “yellow journalism” refers to irresponsible reporting.

What Do Yellow Feathers Mean? 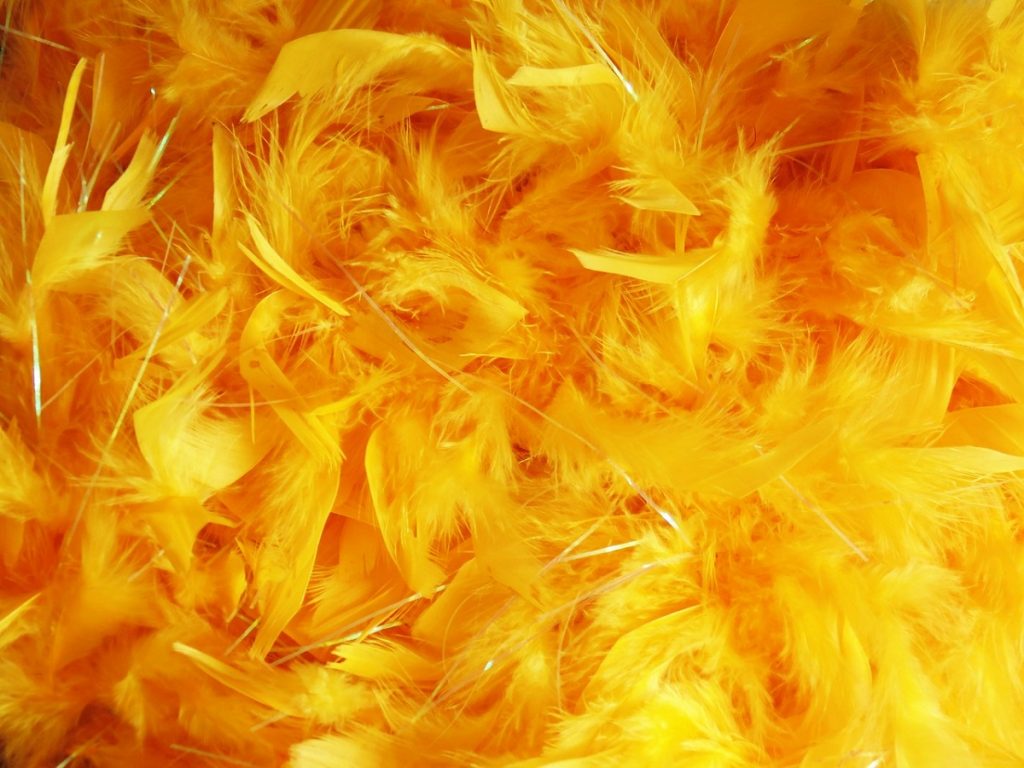 We’ve talked about what blue feathers mean, as well as the meaning of brown feathers. So, what do yellow feathers mean?

Feathers in general symbolize freedom, limitlessness, and transcendence. Feathers evoke the image of birds, specifically of birds taking flight and leaving behind a feather as they soar into the limitless sky. Colors, however, have their own meaning, so a colored and multi-colored feather can change or add to feathers’ symbolism.

Yellow feathers symbolize the joy and hope of finally being free and looking at the bright future that lies ahead. This is a good symbol for those who have recently felt lost, anxious, or depressed but found a reason to look forward to the future. It could be something as simple as an event that can lift everyone’s spirits up, or simply choosing to be optimistic and motivated and believing that there is a bright future in store.

We’re all happy and optimistic for our own reasons. You might be a man or woman finally expecting a child with your partner after years of trying to start a family together. Or, you might be a survivor of an event that caused you great loss, but you choose to look forward and make the most out of the life you have. Or, you can even be down on your luck, financially struggling, but still use a yellow feather to symbolize your optimism that things will get better eventually.

If you see a yellow feather, take it as a sign for positivity. A yellow feather can remind you to stay cheerful, present, alert, and focused with what you have and can have in your life rather than what you don’t have. You may not be the richest or most talented in your area, but you strongly believe in the possibility that you can improve your life if you do something about it.

There’s a superstition about feathers and angels, one I’ve mentioned many times on these types of articles. In Christian superstition, it’s said that if you happen to find a feather in your way with no idea how it got there in the first place, it’s likely that your guardian angel or a deceased loved one in heaven left that feather for you to find. Finding a yellow feather, then, could mean that your angel is telling you to stay positive in the face of any problem you’re experiencing at the moment.

Yellow may have a wide range of meanings, but it’s most likely that all the symbolism behind yellow feathers are generally positive. Do you have any yellow feathers or yellow feather accessories with a special meaning? Let us know in the comments below!