What Does a Blue Feather Mean?

Blue feathers are a beautiful sight to see. You have the daintiness of a feather mixed with the calming blue shades. While we’ve already tackled the meaning of feather tattoos and other colored feathers like what brown feathers mean, in this article we’ll be tackling the meaning of blue feathers and what they may mean in terms of color and feather symbolism combined.

What Does the Color Blue Mean?

The color blue is mostly associated with the sky and sea. The sky gets its blue color because when sunlight scatters in the Earth’s atmosphere, blue travels in shorter, smaller waves so we see a blue sky most of the time. On the other hand, the ocean is blue because red, orange, and yellow light are absorbed more strongly by water, so it’s blue light that gets reflected by the ocean. There are many variants of blue, some of which include:

Because of its association to sky and sea, the color blue has meanings associated with this. Because of its association to the sky, blue symbolizes peace, freedom, and tranquility. In fact, a few studies have shown that the color blue has calming effects and can slow down metabolism or decrease appetite. It’s also the go-to color for things related to air, like air conditioners, air ports, and airlines. For the sea, it symbolizes depth, given the deepness of oceans and seas. Because of this, it’s also used for products related to water, like mineral water, and products and services related to cleanliness.

We’ve already discussed the meaning of feathers in a previous article. Generally, it symbolizes freedom and transcendence, but it can also symbolize guardian angels, passed loved ones, courage, or morality, depending on the culture, religion, or beliefs you follow.

Blue feathers in general symbolize calm and peace. You are free because you have no burden holding you back. You tell no lies, have no debts, and have no quarrels with anyone, allowing you to be free to speak your truth and feel at peace, no matter the circumstances. The situations these apply to can vary greatly. It can be an everyday worker who has just paid off their student loans, or someone who has just forgiven a long-standing feud with an enemy.

Blue feathers are also a symbol of communication, truthfulness, and self-expression. Having a blue feather can inspire you to believe in your own ability to express yourself and your deepest truths. It can be a reminder to communicate clearly and truthfully, but not necessarily be blunt and rude in the process.

Dark blue feathers, on the other hand, are knowledge, power, integrity, and seriousness. Featuring heavier values associated with the deep ocean, dark blue feathers are more serious and grounded. This symbolizes someone who is intelligent, astute, and careful with their actions. They’ve worked hard to reach this level of freedom, and while they enjoy serenity and peace, they’re not going to lose this freedom by taking it for granted. 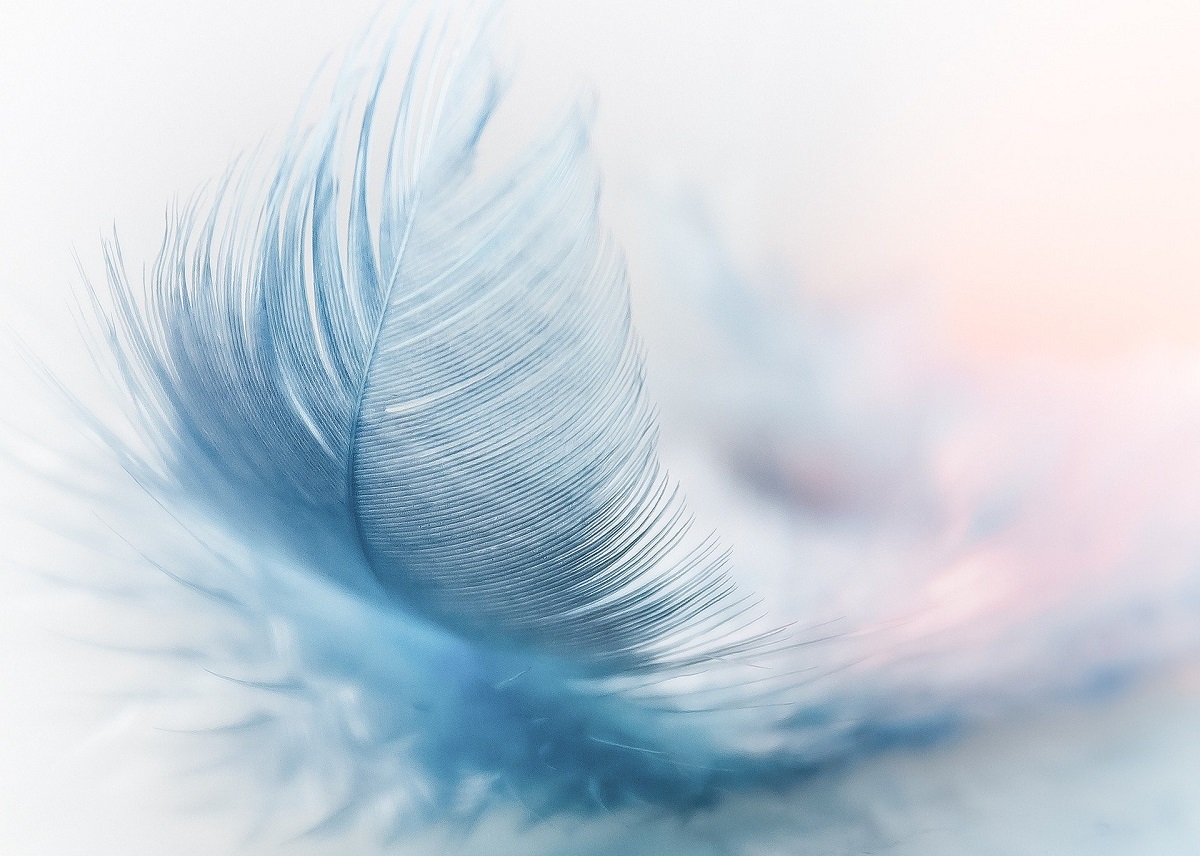 Gray is a sad color, often meaning dull, loss, and depression. It’s a cold, distant, and remote neutral color. It’s the total opposite of a vibrant blue, so put together, it could represent the sad loss of someone. However, the blue represents that there is a silver lining from this loss. It could mean that a loved one who has passed away is at least finally at peace.

For a personal example of mine, I see blue and gray feathers as the perfect symbol for my grandmother’s passing a few year’s back. Weeks before her death, she got into a major accident at home that resulted in her going in an out of intensive care. After her major surgery where she literally died for a few seconds, she suffered multiple injections and the adverse side-effects of her medicine, eventually succumbing to sepsis because her spleen was too damaged to function. One day it became too painful for her to bear that the doctors placed her in a coma. She passed away shortly after, and while it was a sad loss for our family, I felt a sense of peace knowing that she wouldn’t feel any more pain.

Blue is a color with a wide range of values and ideas, so it’s no surprise that different types of blue feathers can have their own meaning. Do any of these colored feathers have a specific meaning in your life? Let us know your story in the comments below!