Got PCOS? Watch Out for Endometrial Hyerplasia

Do you experience heavy bleeding and clotting for a day or two, which then stops as if it never happened? Do you suffer from abdominal pains once in a while? You may want to get yourself checked. These can be signs of endometrial hyperplasia.

What Is Endometrial Hyperplasia?

The endometrium is the lining of the uterus that builds up before menstruation. Their purpose is to support the organ in case a woman in her child-bearing years becomes pregnant. If no fertilization or conception occurs, the body forces the lining out through menstruation.

Endometrial hyperplasia occurs when the cells lining your uterus grow too much. This can result in a condition called endometrial cancer if left untreated.

The normal thickness of the endometrium depends on the age of the woman, as well as the menstrual phase she’s in at the time of the ultrasound. Usually, a premenopausal woman would have a uterine lining that’s between 2 and 16 mm thick. For postmenopausal women, it is less than 5 mm.

Endometrial hyperplasia is associated with several medical conditions such as obesity, diabetes, and hypertension. However, the exact causes are not well understood.

One thing is quite clear: it has a strong association with estrogen levels. The hormone estrogen stimulates the growth of the endometrium (uterine lining). Still, too much stimulation can result in a precancerous condition called hyperplasia or an overgrowth of cells typically due to one of two reasons: 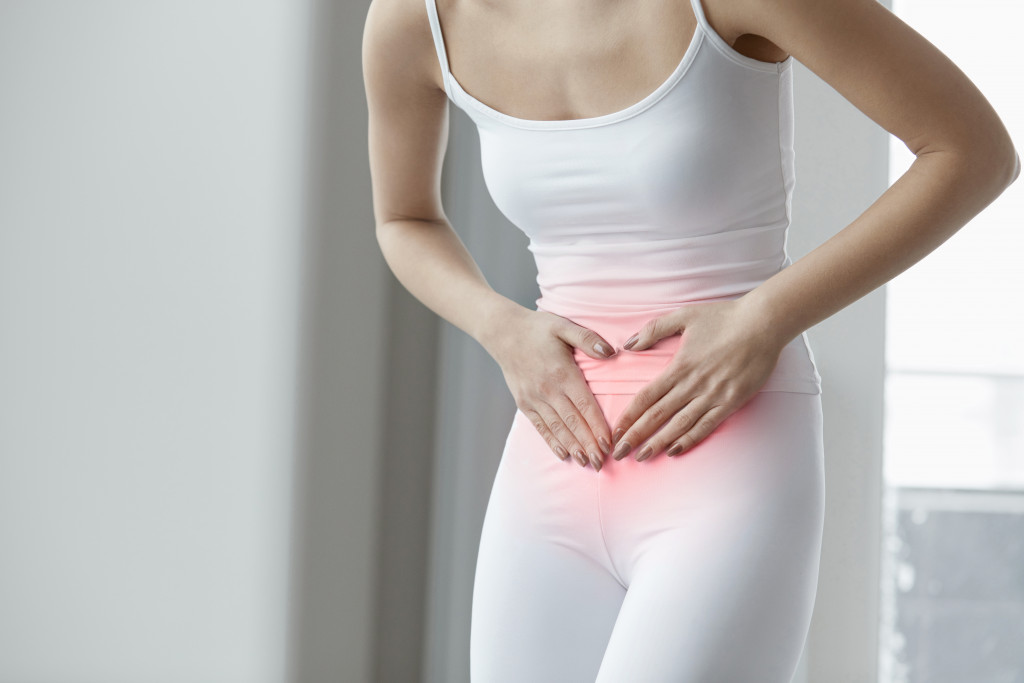 What’s the Link Between Endometrial Hyperplasia and PCOS?

Polycystic ovarian syndrome (PCOS) is a hormonal disorder characterized by the presence of immature eggs (egg follicles) in the ovaries, which may also become enlarged. Some of the common symptoms include irregular periods, obesity, and excessive hair growth (hirsutism). Some studies also associate it with diabetes and hypothyroidism.

It turns out that it can be a strong risk factor for endometrial hyperplasia. As with most things, many factors are at play:

Women with PCOS usually have higher levels of testosterone, which can explain their increased risk of acne, body hair, and even aggression or rage. Through a process called aromatization, the body can convert the excess ones into a type of estrogen. Thus, even if testosterone is a male hormone, it can still impact the uterus, including increasing the thickness of the endometrium lining.

Aside from elevated androgens like testosterone and DHT, some researchers believe insulin resistance also plays a role. When you become insulin resistant, your body can’t adequately control blood sugar levels. As a result, too much insulin is produced to deal with the excess glucose in the bloodstream. This leads to increased growth of uterine tissue, which may lead to endometrial hyperplasia.

When insulin resistance becomes uncontrolled, it can lead to diabetes, which is now a double-whammy situation for women.

First, diabetes is a risk factor for a host of other chronic diseases such as cardiovascular disorders, hypertension, and chronic kidney disease.

Second, it also further increases the odds of someone with PCOS developing uterine problems like hyperplasia. Since cells require insulin to absorb glucose from the body into their cell membranes, organs with a lot of surface area, like fat tissue and muscle tissue and the endometrium (lining of the uterus), can become susceptible to excessive glucose levels.

Diabetes is also associated with higher levels of estrogen. Some research suggests that this is caused by increased aromatase enzyme activity in the adipose (fat) tissue surrounding the body’s organs, which, as mentioned, converts testosterone into estrogen.

In diabetics, fat cells are more likely to produce hormones called cytokines, increasing cell growth rates and cause the endometrium to grow faster than normal.

Women with PCOS may want to consider private ultrasound scanning to check the thickness of the uterus lining. If it is abnormal, particularly when the person doesn’t menstruate or experiences irregular periods, the doctor may suggest further investigation:

Sometimes endometrial hyperplasia doesn’t cause significant symptoms until it has become cancerous. The signs may also mimic other conditions like PCOS. The only way to spot it fast is to be proactive.