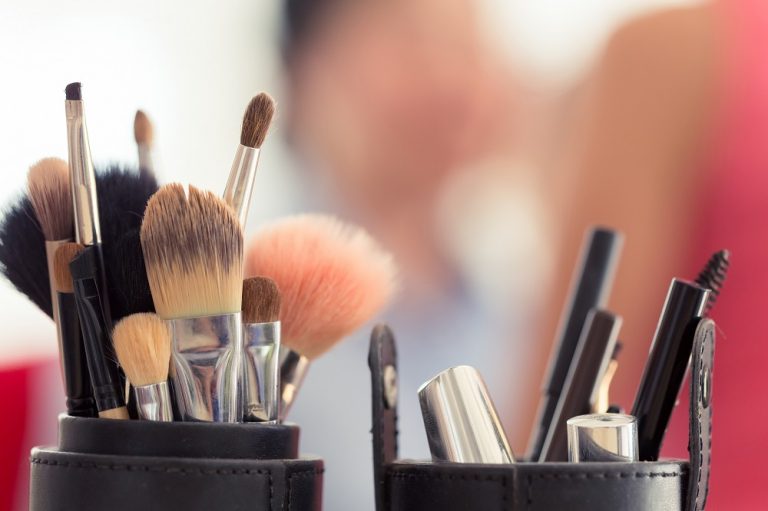 Do You Put Eyeliner or Eyeshadow First?

While makeup allows men and women the creative freedom to do what they want, there are some rules all need to follow for a flattering look. To name a few: don’t slather on foundation with a totally different skin tone to look more tanned; only use lipstick on your lip area; use lip balm (or ChapStick) before any lip product to keep the moisture; and apply mascara properly to avoid clumping.

But one rule in eye makeup has confused many: do you put eyeliner or eyeshadow first? Some say eyeliner goes first, while others say eyeshadow. In truth, there’s no hard rule on whether eye shadow or eyeliner goes first. But here’s the advantages to doing it one way or the other so that you can decide which method works best for you.

Eyeliner defines the eyes by highlighting the area around it. Eyeliner can be used to contour your eyes in different ways, making it look bigger, smaller, wider, or more narrow, depending on your normal eye shape. Eyeliner comes in multiple forms: liquid pen, pencil, or a gel pot that requires additional brushes for application. While eyeliner is generally black, you can also find eyeliner in blue, turquoise, white, and other colors. You can purchase eyeliner in your local drugstore, cosmetic store, or supermarket.

The use of eyeliner dates back to the Ancient Egypt Civilization, where eyeliner was used for both aesthetics and to protect the eyes’ skin from the sun. It was also meant to protect people from the curse of the evil eye. While eyeliner was originally made with kohl, it was also made with materials like copper ore and antimony, so it was no surprise that people were getting sick from the galena (a form of lead) in the makeup. Fortunately, today’s eyeliners do not have lead and are made from safer materials, making them generally safe to wear near the eyes.

While eyeliner is placed around the eyes, eyeshadow is applied on the eyelids and under the eyes. Eyeshadow is available in a wide range of colors, with nearly every shade in the rainbow available. You can wear one or more eyeshadow color, but for multiple colors, you’ll want to blend the colors together for a gradient effect. More natural colors are meant to subtly highlight the eyes or help with eye contouring, while bolder colors make the eyes stand out and look more attractive. You can control how much or how little eyeshadow you want.

Eyeshadow can have different finishes (e.g. glittery, metallic, matte, normal). Eyeshadow normally comes in powder form, but beauty companies have recently come up with eyeshadow in liquid, pencil, and cream form. It can be applied with your fingers, but some eyeshadow palettes come with an applicator. If it doesn’t, then you’ll need to purchase either one all-purpose eyeshadow brush or multiple eyeshadow brushes that provide different effects.

Eyeshadow also dates back to the Ancient Egyptian Civilization, as it was used in Egyptian burials as early as 10,000 BC. It was popular among theater actors as bold eyeshadow could highlight their eyes and the expression they conveyed. During the Victorian era, eyeshadow was seen as vulgar, so the less you wore, the more well-respected you were.

How to Apply Eyeliner and Eyeshadow

Eyeliner and eyeshadow can be used on their own, together, or applied with other eye makeup like mascara, fake lashes, and eyebrow makeup. Personally speaking, eyeliner is much more difficult to apply than eyeshadow specially if you’re going for a clean, crisp, and sharp look with liquid eyeliner. This may also be difficult matching both eyes with eyeliner, especially if you want equal eyeliner. The applications are different depending on what kind of eyeliner you use, but whether you’re using pencil, liquid pen, or a pot and brush, here’s the general way to apply an everyday eyeliner.

This is my personal preference, and here’s why. Eyeliner is more difficult to apply than eyeshadow for a number of reasons. When I make a mistake with eyeshadow that can not be simply drawn over, I have to remove it with makeup remover. I can be careful and use a cotton swab, but because of the size of cotton swabs, a part of it is going to rub over my eyelid. So, if I put on eyeshadow first, part of the eyeshadow would also be removed. This can be an inconvenience because I’ll have to apply eyeshadow to that area again, but I’ll have to remove everything and start from square one if my eyeshadow is gradient.

But if you start with eyeliner first, you can get the most difficult part of eye makeup over with before moving on to eyeshadow. If you mess up eyeshadow, it’s easy to simply trace over eyeliner or remove the eyeshadow without getting your eyeliner. Also, if you’re using a liquid eyeliner pen and powdered eyeshadow, the powder can transfer to the tip of your pen, smudging it with color.

Many people have their own reasons for preferring to put on eyeshadow before eyeliner. If you’re using eyeliner pencil, it won’t really affect the quality of your makeup if you apply it before or after. And those with liquid eyeliner prefer to put eyeshadow first before applying after makes their lines less sharp.

Overall, however, it really prefers on your preference and what is more convenient for you during your makeup routine. Try doing both methods to see which one works for you and your style better.